In Need of a Vision Quest 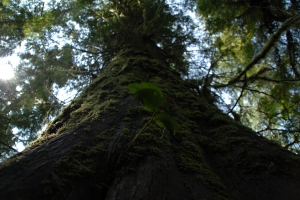 I have been on three Vision Quests at different points in my life. While I did not have an encounter with spirit guides on any of these quests, each time I learned something important about myself that helped me to move forward with my life.

With my first Vision Quest, I was a young woman doing a  job I had dreamed of, but finding it extremely stressful. I selected a site beside the lake, out in the open, on a large slab of granite.  I set up my circle with prayers and sat in the middle as darkness fell.  Several times through the night, I stood in each of the eight directions on my circle and meditated on the energies and the spirits for each.   At one point, I found myself dancing the energy of each direction as it was expressed in my life.  I pounded my feet into the ground and pressed my fist into the air aggressively in the north, the place of the mind, while I danced myself into a sobbing child in the south, the place of emotions.

In the darkness of the night, with emotional armour stripped away by fear and exhaustion, I saw how my beliefs were shaped by my emotions, and knew that I worked so hard in an attempt to earn the love I had never felt as a child.  There was beauty in the clarity of my vision, if not in the vision itself.  This would be the first step towards leaving my job.

Several years later, in a different job with a young son of two, I went on my third Vision Quest.  This time, I selected a site deep in the forest.  I called upon the energies and spirits of the eight directions while it grew dark.  At the beginning of the night, I was scared of every sound.  I peered into the darkness at shadows that seemed to be moving.  I felt separate from the forest.  I felt like I did not belong.  And I felt like every living creature in the forest could sense my presence.

I meditated in the centre of my circle.  I focused on my breathing.  I sent my energy into the earth.  Several times through the night, I walked to the perimeter of my circle and called on the energies of each of the eight direction in turn.  I asked for clarity and direction in my life.  But each time, I mistakenly skipped the northwest, the direction of karma and destiny, until I finally asked myself: “What piece of my destiny am I trying to avoid?” For months, I had been trying to decide whether to have a second child.  Two years of sleepless nights with my “high needs” son had almost done me in.  I really felt that I could not survive mentally if I had a second child.  But every time I thought of not having a second child, I broke into tears.  I realized in that dark forest that a second child was written into my script; it was a choice I had made before I was born.

When dawn arrived, I was quiet inside.  I felt like I was part of the forest.  I no longer felt afraid of the forest or the creatures living in it.  I felt a peaceful sense of alignment with all the energies around me.

Now 18 years later, as the mother of two children who are preparing to leave home, I feel the need for a Vision Quest.  I feel worn down by the material demands of life.  I feel disappointed in people; discouraged about the world.  I feel disconnected from the earth.  I don’t feel finished yet, but I don’t feel passionate about anything any more.   I need to remember what it feels like to sit alone in the wild; to feel a part of the earth; to re-connect with the mystery.

I am a woman and a mother, a sister and a wife. I have called myself a socialist and a feminist, an environmentalist and an activist, a pagan and an atheist. But, at this stage in my life, none of these labels feel right. I am searching; trying to find an inner calm; trying to make peace with life's disappointments; trying to answer the big questions in my own small life.
View all posts by kp →
This entry was posted in Healing & Compassion, Signs, God & Universe, Writing for your life and tagged Ceremony, claiming power, Fear, healing, lifestages, Meditation, signs, Vision quest. Bookmark the permalink.

6 Responses to In Need of a Vision Quest